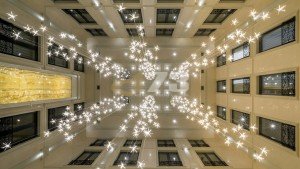 The Ambassadori Hotel in Tbilisi, located in the historical center of the capital city of Georgia, has been significantly enlarged during the past three years according to the project by Studio D73 Arch. Marco Vismara & Arch. Andrea Viganò. A completely new building of 9,000 square meters, based on the architectural project of the local firm Qalaqproeqt, has been added to the historical part of the hotel – almost 4,000 square meters – built in the Eighties and kept in its original conditions. The building, recently renewed, includes 121 rooms – 83 of them are new – and a presidential suite which will open soon, on five floors. The new Ambassadori Hotel contains also a Spa, an Italian restaurant and a Casino in the basement which will open soon, too. The newly completed building is a fine and elegant five-star hotel, where Made in Italy has a starring role. D73 proposed an eclectic style: a classic and elegant theme with some contemporaneous points; here, the main topic is the custom made attention for the project. Specific attention has also been paid to the details, especially for the elements created by the Italian workforce who worked there and whose works was well integrated with the local artisans in a cultural dialogue between Italy and Georgia. An example of this is the wide use of wrought iron that frames the stairs and all the windows facing the central hall; wrought iron has also been used for the external façades: it is a typical Georgian element which has been combined with precious marbles, elegant textiles, important decoration, valuable wood, crystals, soft leathers. Everything has been looked after from the artisans who have made a tailor-made work for Ambassadori. Ambassadori Hotel is the most prestigious touristic place in the whole Georgian capital: this is due to the new building and also to the noteworthy location where it stands, in the heart of the old city just in front of the massive Presidential Palace, overlooking Kura river and Shavteli Street, the old central road of Tbilisi, full of restaurants and nice places.